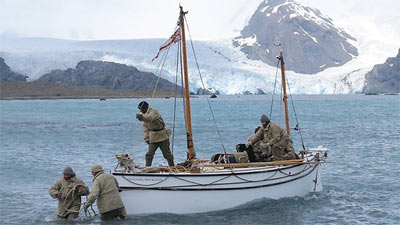 When a team of explorers decided to re-create Shackleton's epic 800 nautical mile journey from Elephant island to South Georgia using traditional equipment, it was James Taylor & Son that they asked to reproduce the original style of boots for the trip.

At James Taylor & Son we have vast experience in designing and making all types of footwear.  So when the members of the Shackleton Epic team needed to source original, hobnailed boots suitable for climbing across the mountains and glaciers of South Georgia, they turned to us for advice.

The initial plan was to make exact copies of the surviving boot held in the Polar Institute at Cambridge.  In the event, a tight timescale and budget limits meant that the fully bespoke option wasn't feasible, so instead we were able to convert off-the shelf boots of a similar design into something almost identical to the original footwear.

As a result the Shackleton Team traveled 800 nautical miles and then crossed some of the most hostile landscapes wearing traditional leather-soled boots, with nothing more than screws and hobnails for grip on 50 degree ice slopes.

We were delighted (and hugely relieved) when they successfully finished their expedition.  And we would be delighted to help you with your footwear problems, regardless of how epic your journeys are likely to be.....